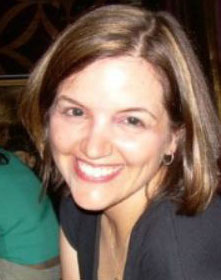 Upon graduating from high school, Helene M. Brennan, P.E., M.ASCE enrolled at Northwestern University, and began her longtime dream of studying civil engineering. As a college freshman, Helene joined ASCE, and soon became active with Northwestern’s Steel Bridge Competition team. She enjoyed how the project brought classwork to life, and eventually became the team leader, as well as the Co-President of her Section. Years later, Helene remains an active member of ASCE, serving on the Maryland Section’s Centennial Committee. In the past, she has also participated as a judge for regional Steel Bridge Competitions, and returned to visit Northwestern’s 2013 Steel Bridge team. She laughingly says, “More than anything, the students were excited to see the pictures of our bridge. They couldn’t believe that we had a team go to Nationals.”

Helene currently works at STV, Inc. in Baltimore, Maryland as a highway engineer. She has been practicing in the field for eleven years, and continues to enjoy the challenges and rewards associated with designing huge projects.

Helene gave her first gift to the Foundation in 2009, in memory of Daniel Hogan, her former Steel Bridge team’s mentor. When asked what precipitated this tribute gift, Helene commented, “I learned a lot from him, and he was just such a wonderful person. I wanted to honor him in some way.” Even now, Helene continues to give in memory of Daniel Hogan, but also in honor of her former professor, and renowned transportation expert, Joseph Schoefer—a man who also taught Helene’s father while he was studying civil engineering at Northwestern!

In 2013, Helene joined the ASCE Foundation’s Pacesetters Circle, which is a group of supporters who give for five or more consecutive years. By honoring her past mentor and professor in this special way, Helene is enabling future generations of civil engineers to have the same great experiences that she had as a student. The Foundation is proud to sponsor student competitions, which bring the classroom to life, and appreciates all of the generous philanthropy from outstanding ASCE members, like Helene Brennan.