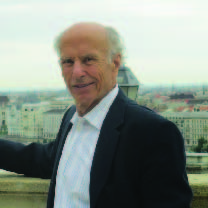 John Lenard was born in Budapest, Hungary, and was exposed to engineering at an early age. His father, Dr. Sando Lenard, was an engineer and his mother, Dr. Lili Lenard, was a neurologist. Mr. Lenard studied at the Technical University of Budapest and received Dipl.Ing. Degree, an engineering degree, in 1956. During the Hungarian Revolution of 1956, John, along with more than 200,000 Hungarians, fled Hungary to escape from the communist regime. In January 1957, John came to the United States as a political refugee.

Upon his arrival, he obtained a junior engineering position with New Haven Consulting Firm and pursued an M.S. in Civil Engineering from the University of Connecticut School of Engineering. It was at this time when Mr. Lenard became a member of the ASCE. After graduation, Mr. Lenard served as town engineer for the Towns of Trumbull and Branford, Connecticut. After getting married, he continued his professional career in New York City where he worked as project engineer for two large, international consulting engineering firms. His projects included regional water supply plans for the Southeastern Massachusetts Planning District, the Susquehanna River Basin, and various Peruvian cities; water treatment plant and distribution mains for the Saigon Metropolitan Water District in Vietnam; and designed the water treatment plant in Rabat, Morocco.

In 1970, he established Lenard Engineering, Inc. (LEI) in Storrs, Connecticut. During the firm's early years, LEI provided civil and environmental engineering services to municipalities, state and federal agencies, and private concerns. From the very beginning, the multidiscipline engineering firm grew rapidly because of Mr. Lenard's background and expertise. LEI quickly became recognized as a leader in the field of water supply engineering and dam design.

You, too, can leave a legacy through your estate, or with an impact gift during your lifetime.

Is an endowment gift right for you?

If you would like to learn more about how you can make a gift to our endowment, please contact us. We would be happy to work with you to structure an endowment gift to meet your charitable goals.