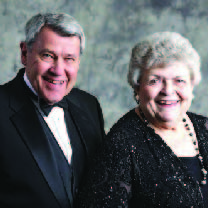 Richard “Dick” Stanley was a professional engineer, businessman, and world citizen. He earned engineering degrees from Iowa State University and the University of Iowa.

Mr. Stanley was introduced to the engineering profession by his father, C. Maxwell Stanley, one of the founders of Stanley Consultants, and joined Stanley Consultants as a design engineer in 1955, after receiving degrees in Mechanical and Electrical Engineering.

Mr. Stanley was a registered professional engineer and past president of many professional organizations including the American Council of Engineering Companies, the Iowa Engineering Society, and the National Construction Industry Council. He was a member of ASCE, NSPE, ASME, IEEE, and ASEE. He served as Chair and President of the Stanley Foundation, Chair and past President of the Stanley Group, and retired as the Vice-Chair of the Board of the HNI Corporation.

In 2001, Mr. Stanley received the Hoover Medal for the advancement of engineering practice, and an exceptional contribution toward building a global community through his leadership in education and policy development. The Hoover Medal is jointly awarded to engineers in recognition of great, unselfish civic and humanitarian services. The Hoover Medal is administered by a board representing five engineering organizations: ASME, ASCE, AIchE, AIME, and IEEE.

Throughout his distinguished career, Mr. Stanley devoted his energy to strengthening the consulting engineering practice and its service to the public.

Mr. Stanley also worked diligently for the Stanley Foundation, a charitable organization focused on securing peace, as well as, freedom and justice. He was a noted supporter of the United Nations.

Mary Jo Stanley was a long-time board member of the Stanley Foundation, who, through her dedicated work, welcomed diplomats, officials, and scholars from around the world to both the community and the foundation’s mission. She was known for her inviting and warm personality, which fostered a family atmosphere, ultimately bringing people of differing opinions together through friendship and respect.

The Stanley’s reach was, and remains to be, global. Dick and Mary Jo were world citizens who were committed to understanding how they could further appreciate, and perhaps help, the furthest reaches of our globe. Their efforts helped support international peace and safety, the arts, the engineering profession, and education.

The Stanley’s legacy will stand as a shining example of civil engineers’ ability to engage with their communities to solve complex technical and social problems. The ASCE Foundation is proud to recognize Richard and Mary Jo Stanley, through their gift from the Community Foundation of Greater Muscatine, as members of our Legacy Society, 1852 Society, Founder Society, and the 2019 Philanthropist Society.

Is a charitable bequest right for you?

We have resources that will help you learn more about bequests. Click here to review sample bequest language. You will see how easy it is to include a bequest in your will or trust. If you have questions, please contact us.