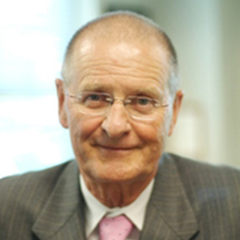 Robert L. Bowen, P.E., Dist. M.ASCE, received his bachelor’s degree in civil engineering from Purdue University.  He has distinguished himself in the construction industry as the founder and chairman of Indianapolis based Bowen Engineering Corporation. The multi-market company specializes in water and wastewater treatment plants and energy utility construction, covering 15 states throughout the Midwest and Southeastern United States. Bowen is considered an authority on preplanning and leadership practices in construction. He is also founder and instructor for the Associated General Contractors Project Manager Institute.

In October 2010 he received the Distinguished Member of ASCE award, and in March 2012, he received the ASCE OPAL Award for Outstanding Lifetime Achievement Award in Construction.

Bowen became a member of the ASCE Foundation’s Founder Society with his generous philanthropic gift in 2019.