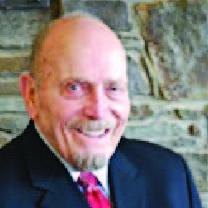 "I strongly believe in the profession of civil engineering; it is the glue that holds our communities and societies together. Civil engineers build better living conditions, design stronger facilities, and I believe in supporting future engineers through gifts to ASCE."

Cranston R. “Chan” Rogers, P.E., Dist.M.ASCE, COL (R) believes not only in supporting civil engineering today, but creating a strong base for future engineers. His accomplishments in transportation engineering have taken him from Boston's original Central Artery/Tunnel project in the 1960s, to planning the first long-distance overland movement of a nuclear reactor to its plant site. Throughout his career, Chan maintained friendships with colleagues and mentors whom he now honors through gifts to the Foundation.

Chan has received numerous awards for his distinguished career of designing some of the most challenging engineering projects. At the age of 18, he joined the Army Specialized Training Program, a military course that gave him a background in engineering before he left for Europe. He returned to college on the GI bill, and earned a Bachelor’s Degree in Civil Engineering from the Citadel Military College of South Carolina. Chan managed to balance both earning a Master’s Degree in Civil Engineering from the Massachusetts Institute of Technology, and working on the replacing Boston's deteriorating six-lane elevated Central Artery (I-93) with an eight-to-ten lane state-of-the-art underground highway.

It was during WWII that Chan met Walter E. Kunze Jr.,P.E., F.ASCE, and started a lifelong friendship. After their Army service, both Walter and Chan graduated from the Citadel Military College of South Carolina, and later attended the Massachusetts Institute of Technology. After college, the friends separated and were not reunited until 2005, but they picked up right where they left off. After Walter’s death in 2010, Chan gave a gift to the Foundation in his mentor’s memory. Through giving in memory of loved ones, Chan helps continue to grow the profession and remember those that came before.

Is making a memorial gift right for you?

If you have a friend or family member whose life has been touched by the ASCE Foundation, consider making a gift to us in his or her name.

If you have any questions about making a memorial or legacy gift, please contact us. We would be happy to assist you and answer any questions that you have.

The Stanley’s reach was, and remains to be, global. Dick and Mary Jo were world citizens who were committed to understanding how they could further appreciate, and perhaps help, the furthest reaches of our globe. The Stanley’s legacy will stand as a shining example of civil engineers’ ability to engage with their communities to solve complex technical and social problems.