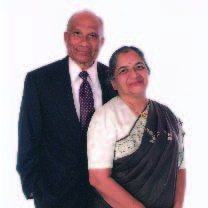 After graduation, Ray was involved in many exciting projects -- from designing many of the buildings at The Ohio State University, University of Toledo to overseeing the structural design and the construction of the Lunar Launch Complex 39, Pad A and Pad B for NASA. This launchpad successfully put Apollo 7 and Apollo 11 into orbit. From 1968 –1973, Ray served as a Chief Structural Engineer in the design of various plants like stamping, engine, assembly etc. for the auto industry at General Motors Corporation, Ford Motor Company, and Chrysler Corporation.

From there, Mr. Patel's career took many other exciting turns. For the next five years, he was the Supervising Structural Engineer for the projects for the Department of Energy. In 1984, Mr. Patel joined the Department of Public Works in the County of Los Angeles. As a plan checker, in the Building and Safety Division, he was involved in checking the structural design, including design calculations, specifications and plans for complex building structures and authorizing building permits until 1990.

The Northridge Earthquake hit the Los Angeles area in 1994, causing the failure of bridges, which led to fatalities, and billions of dollar’s worth of property damage. Ray Patel with his team of volunteer engineers inspected dozens of damaged buildings to assess the structural integrity and safety. This earthquake made the California Department of Transportation’s (CALTRANS) bridge retrofit program a top priority. From 1991 to 2000, Patel managed the retrofit program and his team of structural engineers, analyzed the bridge structures for seismic forces, identified the structural elements of failure to prevent the collapse of structures and the loss of lives, designed the retrofit and oversaw the construction of the retrofits for many dozens of bridges. In 2000, Ray retired from public service and worked as a Consulting Engineer until 2009.

Ray Patel has been a member of the ASCE for over 50 years and is a Legacy Society member. Ray and his wife, Manorama, decided to give back to the Civil Engineering profession by making a gift through their estate to the ASCE Foundation. This gift is for outstanding civil engineering students to pursue and consider a career in structural engineering.

When asked why he chose to give to the foundation to help students Ray said, “I am very happy and grateful to give. I remember receiving a scholarship when I was a student and in need. I want to encourage young people to study this noble profession.”

Is a charitable bequest right for you?

We have resources that will help you learn more about bequests. Click here to review sample bequest language. You will see how easy it is to include a bequest in your will or trust. If you have questions, please contact us.