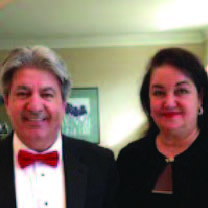 Growing up in Sarmad A. “Sam” Rihani’s family, you wouldn’t think that he would end up becoming a structural engineer. Both of his parents, his two brothers, and sister are extremely literary-oriented, with published works of prose and poetry. However, when attending high school in Portland, Oregon, he found himself fascinated by the many bridges surrounding him.

At Oregon State University, Sam studied civil engineering, with a focus in structures. Although he originally had ambitions to design bridges, his first job in Kansas City, Missouri, was designing steel buildings. Ever since, he has been practicing in the buildings industry. Sam’s professional practice has taken him throughout the country, and the world. He lived and worked in Saudi Arabia for nine years, then moved back to Kansas City again. After that, he went from Arkansas, to Greensboro, North Carolina, and finally ended up outside of Washington, DC.

While Sam has been a member of ASCE since 1973, when he was a student at Oregon State, he found himself getting increasingly more involved once he moved to Saudi Arabia. It was there that he became the Vice President and President of the Saudi Arabia Section. Sam took a break from leadership roles within ASCE, until 2001. It was at that time that ASCE’s Structural Engineering Institute (SEI) held a Structures Congress in Washington, DC. He commented, “I was pretty impressed with what I saw in terms of the quality of the seminars and presentations. It was well organized and the whole schedule was very attractive to me. I decided at that point to really get more involved with SEI." And get more involved, he did. Sam joined SEI’s Professional Activities Committee, which he subsequently chaired for 5 years, the Business and Professional Activities Division (BPAD) Executive Committee, and became a member of the SEI Board of Governors. Eventually, Sam also became the President of SEI in 2011.

During his tenure as SEI President, Sam focused on strategic planning initiatives, which led to A Vision of the Future of Structural Engineering and Structural Engineers: A case for change. Sam, and the SEI Board of Governors, felt that they needed to take a comprehensive look at what was in store for the future of structural engineering, and assert that tomorrow’s structural engineers need to be innovators and leaders to respond to the changing work environment. Around the same time, the SEI Futures Fund was established as the successor to the SEI Endowment Fund. Sam appointed Stan R. Caldwell, P.E., SECB, F.SEI, F.AEI, F.ASCE to lead the Futures Fund’s efforts.

In January 2014, Sam and his wife, Ina, joined the James Laurie Visionary Circle, with a generous gift to benefit the SEI Futures Fund. Sam commented, “The reason I donated is twofold: I wanted to support the SEI Futures Fund’s powerful initiatives...and motivate others to do the same." However, philanthropy is not something that is new to Sam and Ina. For the past eight years, the Notre Dame University in Lebanon has offered the Sam Rihani Civil Engineering Scholarship. The scholarship rewards one student in their junior year with the highest GPA in their class with tuition and fees for one semester. In fact, when Sam and Ina travel to Lebanon, they always try to meet with the scholarship recipients, if they can.

Sam has dedicated his life to the structural engineering profession. His commitments of time, leadership, and financial support have been of great value to SEI. As an advocate of “A Case for Change,” he supports a reformed undergraduate educational system for engineers, a structural licensure that will be adopted by all states, a proactive participation by structural engineers in the global engineering market, an enhanced and effective continuing education program, and new structural codes and standards that are less complex, while providing more design freedom. He stated, “The reason I have a passion for SEI, is because it’s made a positive impact in my life and career." Sam sold his firm, but has not fully retired. He spends his time working at his home healthcare company, helping his two sons with their new sporting goods distribution company, and spending time with his wonderful grandchildren.

Is making a gift of cash right for you?

One of the easiest and most common ways for you to support the American Society of Civil Engineers Foundation is with a gift of cash. Cash can be used to support our work in the form of:

If you have any questions about gifts of cash, please contact us. We would be happy to assist you and answer any questions that you have.